So, I love reading how other people produce their stuff and I’m thinking maybe somebody wouldn’t mind seeing how I go about it. So I’m going to go through how I did the Hetfield & Hetfield “Tidal Wave Dreams” CD cover. They’ve been giving out hard copies for free/name your own price for a bit, and you can buy it or download it for free at their bandcamp here: http://hetfieldandhetfield.bandcamp.com/

Laying out the concept

So I started off by listening to the demos Casey, their singer and guitarist, sent me. I had about 4 songs. They told me a little about the concept as well. The album is basically a prog-rock/emo/metal/punk mash-up musically (think somewhere between Coheed and Cambria and BTBAM, but way catchier than that sounds). Conceptually, the album is about recurring dreams Casey’s had where tidal waves come and destroy everything. So I wanted something surreal and dreamlike with a sense of fantasy/wonder like a kid would have with a fairy tale, but also kind of desolate and doomy…somewhere between a storybook and a nightmare.

So off to Google image search I go. I use the same process for pop-art style stuff as well. Think of the idea I’m going for, start searching one or two-word searches, and let the weirdness of whatever Google thinks is relevant change my idea for me. I ended up with a lot of birds, a really cool looking cove, and a pretty gnarly wave.

What I do while I’m searching for source images is also create a layout for the illustration in Photoshop. Two to three hours later, here’s what I had: 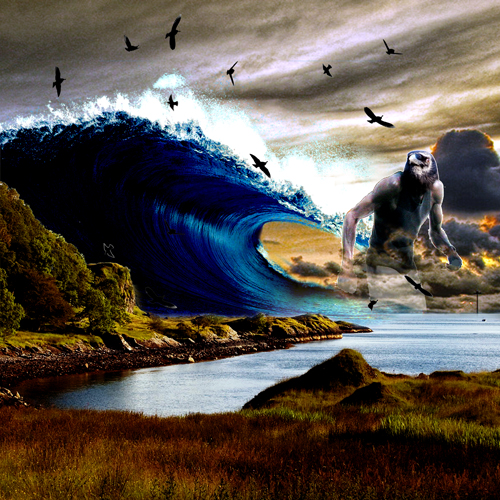 Now, I wanted as much detail in the illustration as possible, so this thing is actually 17″x17″ at 300 dpi. The image above is 10% the actual size (in pixels anyway). 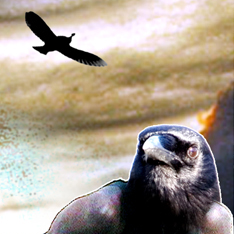 While doing the Photoshop layout, there’s a lot of boring extra stuff. I trace all the illustration work, it’s faster and more accurate, and I personally like the whole concept of re-appropriating digital media and turning it into a hand-made thing…so say what you want about tracing, I’ve got silly art-student reasons for doing it.

Knowing that I’ll be tracing it on a light table, I’ve gotten a feel for how to set up contrast and colors so I can see all the detail I need through another piece of paper, so there’s a lot of messing with levels. The biggest help to me has been discovering the Shadow/Highlights option in the Images menu…you can brighten your shadows without losing detail, so dark spots on this one (like on the bird head, see all that pure black?) I was able to find detail in and actually use instead of guessing.

With that, though, comes a lot of interpretation and improvisation during the actual tracing part. It’s not line-for-line the same as the digital file. You start going, turn off the light table and take a look and see what needs to be darkened up to convey the mood you want as well as the overall tonality of the picture.

So yeah, after the Photoshop stuff is all set, I printed it out on 4 pieces of 8.5″x11″ paper, taped them together where they overlapped, and starting tracing.

Over 12 Hours of ‘cheating’ at drawing later…

I had this bad boy: 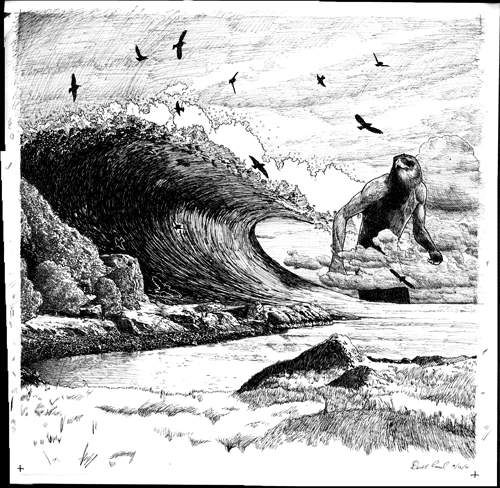 You’ll notice some crosses on the corners. This is to make sure I can line up the color sheet later, after it’s painted and scanned in.

There’s not much to say about the process during the ink drawing phase. I put the blank paper on top of the printout and traced it on a light table. I used 3 micron pens, sizes .03 (compare to Sharpie Ultra-fine), .01, and .005. I only used the .03, the thickest, for dark outlines around major shapes, so the rest is all those really small ones. Here’s a detail compared to the original Photoshop file:

So the thicker black line around the bird-man is the .03 pen. The rest is made with the other two pens, basically like different widths of sewing needles. Stylistically, I was aiming for a cross between old copperplate engraving and comic books from the 1970’s, so there’s some intense detail in spots, but then there’s sketchy areas, and the tidal wave is my attempt at copying Joe Kubert’s way of doing water. Google him if you want to see somebody who is a real master of pen and ink.

Oh, almost forgot, since the whole thing was done in Photoshop initially, I completely skipped the pencil part. Either I draw it pencil and screw up with the ink at some point, or just skip that whole step and screw up with ink right away. No point in wasting time on something I’ll erase and have to try to remove smudges from in Photoshop anyway, right?

Next, I grabbed the old Photoshop printout and put a fresh blank sheet over it for color. I don’t have the control over a brush that I do with a pen (not that either is perfect by any means), so I tend to keep them separate until they’re scanned – I don’t want to risk ruining the ink portion.

Remember the crosses on the corners of the ink one? Drew those in pencil on the color one. When you scan in the ink and the color and put them on separate layers in Photoshop, all you need to do to line it up is move and rotate the ink layer over the color one until all four crosses line up on top of the four in the color layer.

I work really fast with color. I’m not a painter by any means, so it’s entirely about getting the basic hue and the texture of the paint. I use gouache paint watered down to different consistencies depending on whether I want to see smeared paint or if I want it washed out and blotchy. Here’s the color layer: 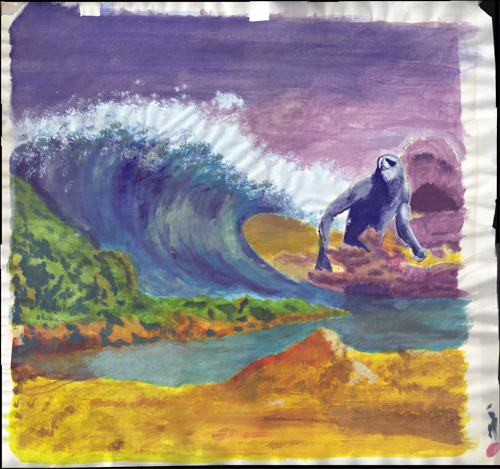 The next step was scanning it all in. First, I scanned in the ink layer. Because the drawing was so much bigger than my scanner tray could fit, I had to do it in six sections. I used a hardcover science textbook to hold the paper down flat against the glass.

I used to manually put everything together until I discovered that Windows, of all the friggin’ things, has an auto-stitch feature that works amazingly well. Basically, you open the folder with your saved image files and select them. Right-click and hit “auto-stitch” and Windows (Vista even!) finds the spots where they overlap and automatically puts them together in one large image file, all the while retaining the original resolution. The ink was scanned in at double resolution, so 600dpi greyscale image fragments, each 8.5″x11″ scan (6 in total) were put together (by Windows, glitchy, barely-functioning, constantly-ruining-my-life Windows Vista) into a 17″x17″x 600dpi file. Nobody else might be shocked by this, but I never thought for a minute that A) they would make this feature and B) that it would work so well.

I repeated that process with the color layer. Opened up Photoshop, set the color to layer 1, the ink to layer 2.

THIS IS IMPORTANT:
I used to be an idiot and delete all the white space from ink work. Anything that wasn’t 100% black would be set to full-on black. It caused a lot of jagged lines to be laid out over the color, and it always printed kind of weak. What I discovered was that if you have a layer of black linework you want to superimpose over color, leave it alone entirely (as far as color correcting or deleting stuff goes) and set the blending option in the layers menu to “Multiply.” It adds the dark lines, including the shading and inconsistencies to the color…so before, where you had a faded black line with white underneath, now you have a faded black line with your bottom layer underneath. It’s awesome.

Here’s a closeup of all three parts separated: 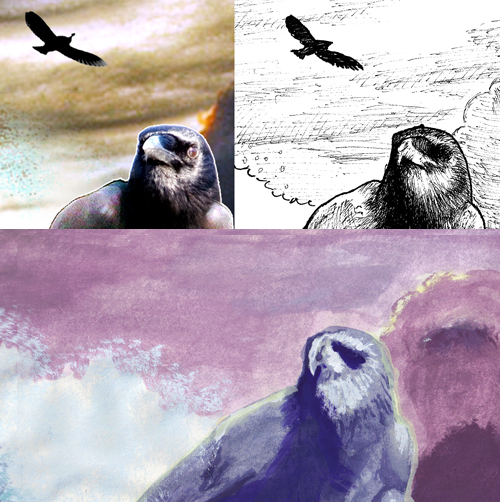 Here’s how it looked all put together, initially: 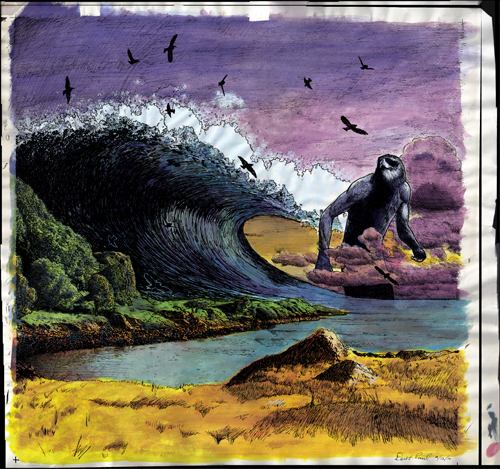 That was okay for a start, but the color was a little too comic-book for me. Especially the wave and those purple clouds. Some tweaking to the lines needed to be done, and the green parts of the cliff seemed a little muted. In general, the tone was all over the place and needed to be unified a bit.

So here’s the final product: 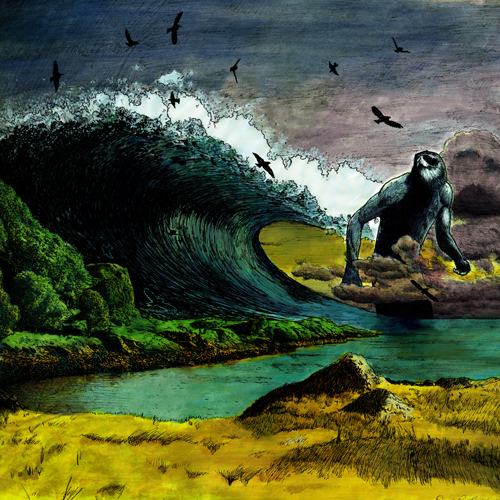 And, to get a quick snapshot of all the steps that weren’t just a matter of technical tweaking in Photoshop, here’s another zoomed in comparison shot: 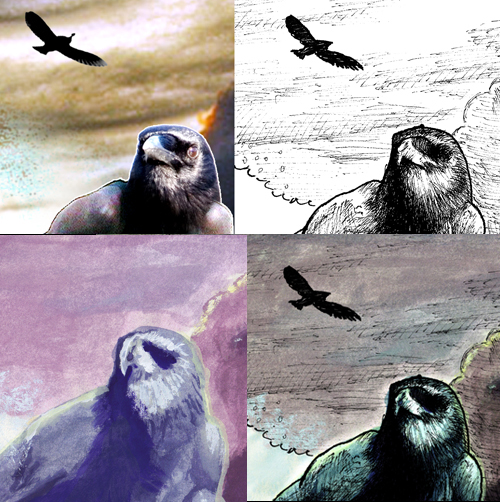 And that’s that. Total time on it I think was somewhere around 18 hours. The bulk of it was the ink part. Not knowing what the guys in the band’s plans were for production, I aimed for vinyl LP size. They’re hipsters and I knew they might go that direction, budget-permitting.

Soon I’ll post how I go through the pop-art style stuff. It’s a lot quicker to do, but it might take longer to explain…It’s all Photoshop. The average time for me on those is between 3 and 5 hours…and usually I’m just nitpicking where to put type.

If you read this whole thing, thanks and you must be really ready to go to sleep now.